This weekend, we’d already planned to go to Disney for a very special birthday party, but since I got print copies of my book in on Thursday, I thought it might be fun to bring along a novel and get some shots of it out in the wild. I love when books are posed on Instagram or folks take pictures of books in places they aren’t suppose to be. So I thought it would be a great way to celebrate finally getting to hold my written words in my hand!

We headed off to Disney with my book tucked in my bag and stopped at a few iconic places to get some shots. Hopefully you’ll enjoy the day right along with us! 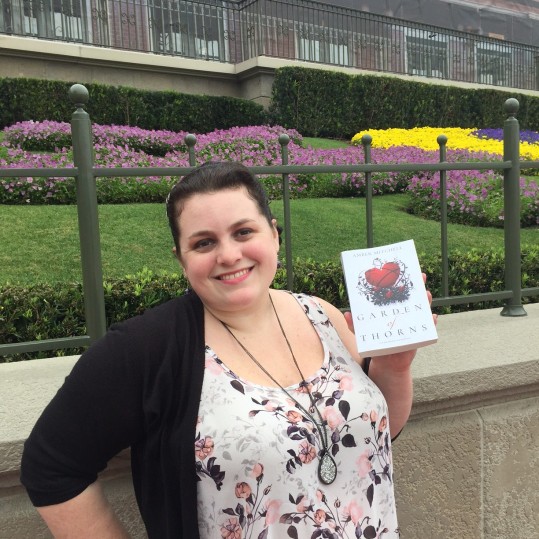 We figured the Big Entrance should be properly photographed. It was a little overcast at the beginning of our journey so I wasn’t sure how long my paper book was going to make it, especially if it rained. Luckily the rain stayed away.

I think it looks especially nice next to Cinderalla’s castle but I could be biased. 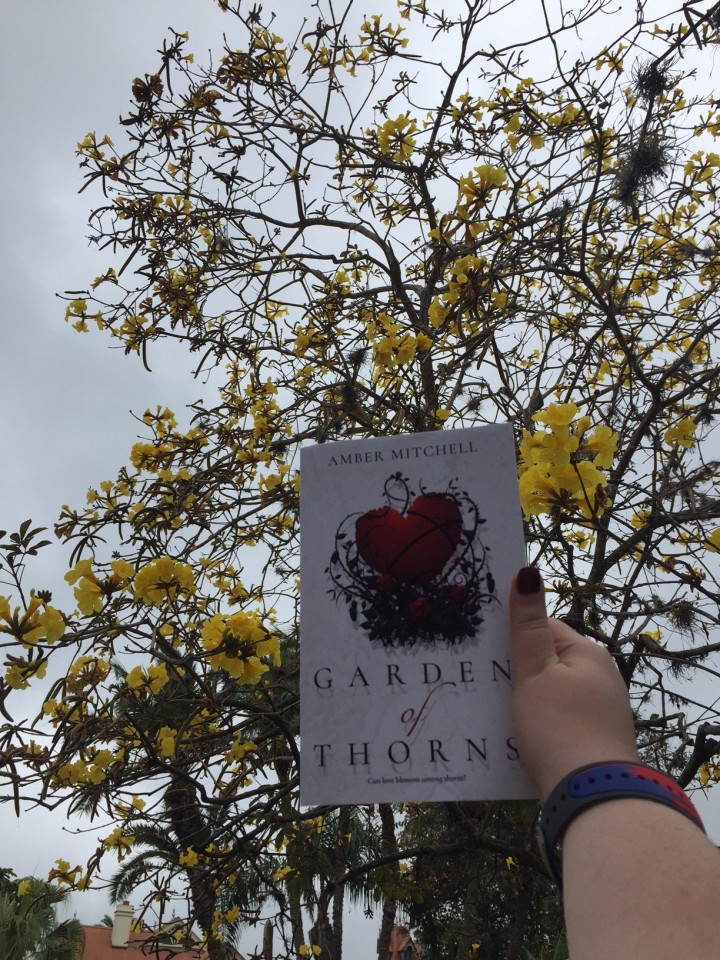 Since the main character’s name is Rose and it has garden in the title, I figured it would look right at home next to greenery. We made sure to snag a few photos among the beautiful flowers blooming at the Magic Kingdom.

Next up was a trip to the wishing well. This is where dreams come true after all. We decided to take some photographic evidence of this theory in practice. Luckily, the well did NOT disappoint. All I need to do was think about my book really hard for it to appear.

Next up, we visited Alice from Alice in Wonderland. We all know she loves to read and is big into fantasy, so of course, my book felt right at home. Not to mention, Alice in Wonderland holds a pretty special place in my heart. It happens to be the subject of my current WIP! 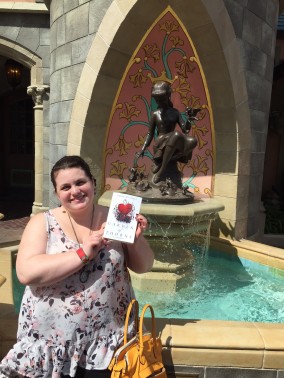 Next up, we went to a few different locations around the park. In Adventure Land, the barrels of rum called out to us, surrounded by beautiful flowers. We had to get a picture next to Cinderalla’s iconic fountain and GOT tried its luck at pulling the sword from the stone. Alas, neither Rose nor Rayce was meant to be king of Camelot. It’s probably better though. They have enough to worry about in Delmar.

Since Beauty and the Beast has my heart, we stopped by Belle’s neck of the woods next and visited Gaston’s pub. I know people THINK Gaston is the villain in Beauty and the Beast but he’s my favorite. Especially the park Gastons. I think it is the best character to play because you get to be rude, conceited, and funny all the time. Since he was my favorite, we mimicked his classic poses in his chair (with my short legs) and stood out by the fountain (water seems to be in a lot of these photos which is funny since it is so bad for paper). 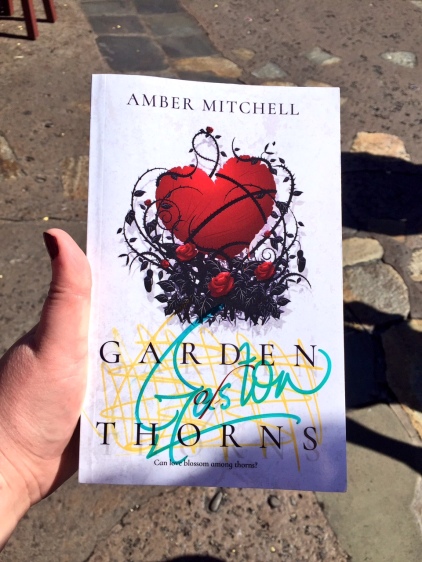 Since we hit all the best spots in the Beauty and the Beast area, we decided it was time to say hello to the characters. I showed Belle my book and made sure to mention that there was another Rose that needed her help. After that, we caught Gaston. I told him he probably wasn’t going to be too impressed since I wrote this book and we all know how he feels about a woman that reads. Well, it turned out that not only did he like the book, but he decided that it was a book all about him and scribbled out the book title to sign it.

Even though he was joking, I don’t think it is such a bad idea. I’m not going to go adding him into GARDEN OF THORNS but a book focused on Gaston is something I’d seriously like to do in the future. 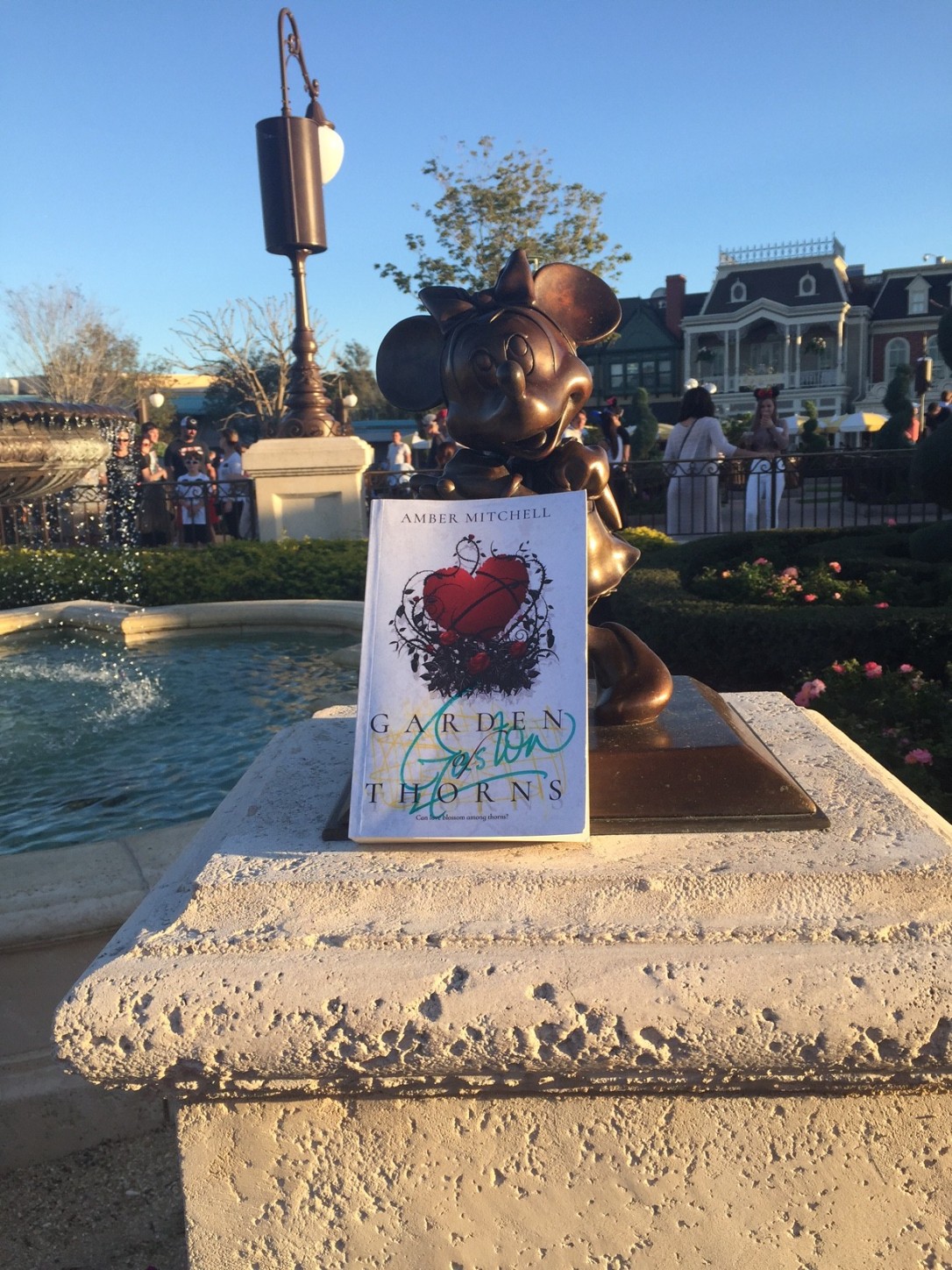 What better way to end the day than to take GASTON, I mean, GARDEN OF THORNS by  the new statue of Minnie Mouse? After such a long day, I think my book enjoyed some(mouse) fawning over it just a bit.

So that is what GARDEN OF THORNS looked like out in the wild. I had so much fun with this that I can definitely see a contest coming in the future when it has been released! Thanks for taking the journey with us.

View all posts by ambermitchellbooks

After seven grueling years of captivity in the Garden—a burlesque troupe of slave girls—sixteen-year-old Rose finds an opportunity to escape during a performance for the emperor. But the hostage she randomly chose from the crowd to aid her isn’t one of the emperor’s men—not anymore. He’s the former heir to the throne, who is now leading a rebellion against it.

Rayce is a wanted man and dangerously charismatic, the worst person for Rose to get involved with, no matter what his smile promises. But he assumes Rose’s attempt to take him hostage is part of a plot to crush the rebellion, so he takes her as his hostage. Now Rose must prove where her loyalties lie, and she offers Rayce a deal—if he helps her rescue the other girls, she’ll tell him all the Garden’s secrets.

Except the one secret she’s kept for seven years that she’ll take to her grave if she must.